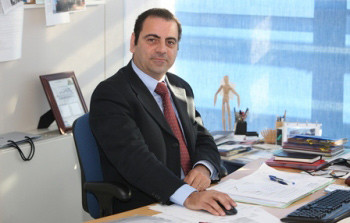 CHINA'S HUNGER FOR TISSUE - WHERE WILL IT COME FROM?
by Marco Dalle Piagge, General Manager, Toscotec Asia & Pacific Ltd.

China certainly needs more tissue, but where will it be produced, and what with?
China has got the taste for tissue. From the limited quantity of low quality tissue produced by hundreds of small, highly polluting tissue lines just a few years ago, the country is now well on the way to having the world's most modern tissue machine "fleet".
The last year or two has seen a strong investment push by the main tissue players in China. This leaves those on the second rung of the ladder with a challenge. If they do not invest, they risk being left behind as they cease to be competitive. The smallest producers really will struggle. They simply cannot compete in terms of quality and their processes, usually based on straw, bagasse or bamboo, put them on the wrong side of the Chinese Government's drive to clean up the industry. Some 4-500 paper mills of all descriptions are in the sights of the legislators, and the process of closing them down has already begun. As such, not all new machines in China are "new" capacity, but replace old, redundant lines.

Encouraged to locate inland
Another change to watch for is the location of new tissue projects. Of course, unlike Europe, there is considerable potential for greenfield projects in this country, but they have tended to cluster around the main conurbations on the coast. In an attempt to slow down the recent tendency of the Chinese to migrate to coastal cities where the standard of living is higher, new mill projects are actively being encouraged inland in areas such as Chongqing and Sichuan. As these new mills bring quality tissue to new areas, so the market for tissue in China will gain even more momentum.

There is an important practical consideration of course, which is access to fiber. The fast, wide new machines being installed in China are fed on virgin fiber. The infrastructure for sourcing good quality recycled fiber does not yet exist in China, and suitable stock preparation equipment to process it has not been installed either. None of the big projects in the past two years has involved deinking. This situation clearly favors coastal mills, as the virgin fiber all has to be imported. The transport infrastructure is improving, however, which will strengthen the competitive case for inland mills, and reduce the fiber division that has existed, whereby coastal mills have produced high quality tissue from virgin fiber, while inland mills have only produced an inferior product from straw, bamboo or bagasse.

The gas factor
There is another differentiating factor between different regions of China which is here to stay, at least for the foreseeable future. A ready supply of gas is not available throughout China. Guangdong for example, has virtually none. Most tissue machines in the 30 to 50 tpd category in China tend to rely on coal to generate steam. If mills on sites without access to gas have plans to step up to higher production levels, they will have to consider their technology very carefully. Coal is simply not able to produce steam at as high a rate as gas, so the magic 2,000 mpm is really out of the question. We believe, however, that speeds close to 1,700 mpm are realistic, and with world-class runnability, this can still put a mill in a strong position, by significantly reducing the production costs. Our message is that with the right technology, (we would of course advocate our energy-saving steel yankee), you can still be competitive with coal.
As it stands, the country already needs several new tissue lines each year to keep up with the rising demand. Of course, even a small annual percentage demand increase in China equates to a great deal of tissue. It will come as no great surprise that around half of the world's new tissue machines last year were installed in China. The fact that the response to demand potential in China has been met with investment in state-of-the-art tissue lines means that the evolution of quality has been rapid. Buyers used to a rather basic tissue have, within a very short period of time, come to expect a quality of virgin-fiber tissue which is a match for what is sold Europe, and often better. The gradual improvement in quality which other parts of the world experienced has just not happened here, and there really is little room for anything but very high standard tissue from new installations.
I have also been highly impressed with the standard of marketing. Producers here are determined to make a very good quality product, and to bring it to the market in a professional manner.

An everyday item
The establishment of tissue in China as an everyday item is well underway, and is spreading beyond the major coastal cities, too. It is unusual to find a restaurant anywhere in the country which does not offer paper napkins now, for example, and as mills spring up inland, the tendency can only strengthen. It is easy to regard China as another world from a business point of view. We should remember, however, that this vast country pays energy and raw material prices at the same level as anywhere else - often more - and the main competitive advantage is the low cost of manpower. But as living standards improve and skills start to attract more of a premium, wage pressure will be upwards. As wage cost pressures increase, producers will be ever more conscious of other burdens on company finances, such as energy. The machine builders who can provide better answers to the ever-tougher questions Chinese customers will be asking, stand to benefit most from this country's undoubtedly bright future in tissue.