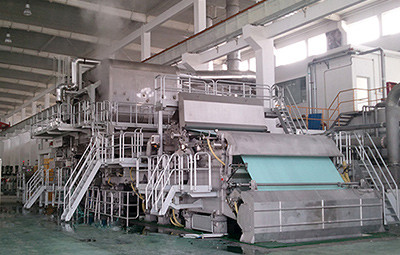 SHANGHAI, Aug. 29, 2012 (RISI) - China's C&S Paper has started up a 25,000 tonne/yr tissue machine at a greenfield plant in Tangshan city, Hebei province. The unit, commissioned in early August, was supplied by Toscotec. It has a width of 3.5m and a design speed of 1,500 m/min. The machine was scheduled to start up at the end of last year. The firm declined to comment on the delay. The tissue producer is pressing ahead with the construction and installation of three other Toscotec units at two mills. The identical machines will be 3.6 m wide, and have a design speed of 1,600 m/min. The first one is expected to come online in late September at the firm's site in Chengdu city, in the southwestern province of Sichuan.

The other two will go to the firm's existing mill in Jiangmen city, Guangdong province. A contact close to the project said that civil engineering work is almost completed. The Jiangmen startups are scheduled for the end of this year. C&S also operates three other tissue mills in China, with one in Zhongshan city, Guangdong province, and one in Jiaxing city, Zhejiang province, and the other in Xiaogan city, Hubei province. In addition to the new 25,000 tonne/yr unit at the Tangshan facility, the firm has a total tissue capacity of 211,000 tonnes/yr. New mill planned: C&S signed an investment agreement with authorities in Luoding city, Guangdong province to build a new tissue plant there last week. According to the firm, a combined capacity of 120,000 tonnes/yr of tissue will come online by March 2014. But other details of the project are unknown for now.