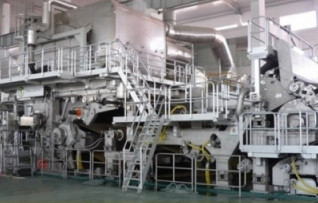 SHANGHAI, June 30, 2011 (RISI) - A major Chinese tissue producer, C&S Paper, has signed up Toscotec to supply five tissue paper machines with a combined capacity of 134,000 tonnes/yr at its mills in China.
The deal was struck after C&S Paper brought another tissue PM provided by the Italian supplier at its mill in Jiangmen city, in China's southeastern province of Guangdong, at the end of last year.
The 3.5 m wide unit has a design speed of 1,500 m/min, and a capacity of 25,000 tonnes/yr.
Two out of the five new machines ordered from Toscotec will be identical to the first one, with a capacity of 25,000 tonnes/yr. The other three will be slightly larger, having a width of 3.6 m and a design speed of 1,600 m/min with a capacity of 80 tonnes/day, or 28,000 tonnes/yr.
One 25,000 tonne/yr unit will also go to the Jiangmen facility, and its startup is scheduled for early October. The other 25,000 tonne/yr PM will be erected at a greenfield plant in Tangshan city, in the northern province of Hebei. The unit is due to come online at the end of the year.

One of the three larger machines will be installed at the company's mill in Chengdu city, in the southwestern province of Sichuan. Startup is scheduled for mid-2012. The remaining two units are planned to be erected at the Jiangmen facility. But the proposed Jiangmen projects are still under the environmental impact assessment review process, pending for approval from the authorities.
The company anticipates the two PMs will come online in 2012, if everything goes smoothly.
Upgrading on economic boom: In the last ten years, C&S Paper has gone from operating more than 100 small machines making low-quality products into a company capable of producing high-quality tissue products.
In that time, many of its outdated machines have been retired and replaced with larger units supplied by foreign firms.
The firm owns five mills in China operating 78 machines, including the new Toscotec unit at the Jiangmen site, with a total tissue capacity of 211,000 tonnes/yr. Among its PMs supplied in the last ten years, eleven were provided by Japan's Kawanoe Zoki and one PM was from Kyoung Yong Machinery of South Korea. All the machines manufactured by oversea suppliers produce virgin fiber-based tissue products made with market pulp.

Expansion revised post-IPO: The company's expansion was funded by proceeds raised from its successful initial public offering (IPO) on the Shenzhen stock market in late 2010, which netted RMB 1.5 billion ($232 million).
However, the firm's present expansion plan is revised from that laid out in its IPO prospectus.
Instead of installing two machines with a combined capacity of 25,000 tonnes/yr at the Tangshan facility, it will erect the 28,000 tonne/yr Toscotec PM at the Chengdu plant. A company source explained the change was made because the existing capacity at the Chengdu site cannot meet robust demand in the southwestern market, while demand in the north, where the Tangshan mill is located, is lukewarm.
Another alteration to the prospectus plan is at its two mills in Guangdong province. The firm initially planned to install three machines with a combined capacity of 70,000 tonnes/yr at its oldest mill in Zhongshan city.
But the plant's infrastructure is outdated and its space is limited, so C&S decided to erect two 28,000 tonne/yr Toscotec PMs at the Jiangmen facility instead, which has space and a sufficient power supply.